Committee for the Fight against Discrimination and Harassment 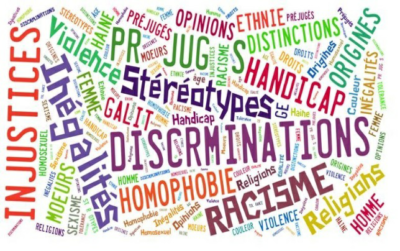 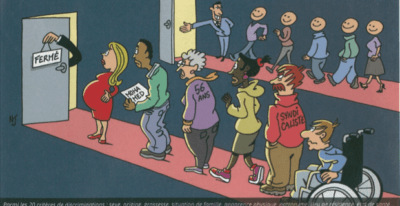 Let’s recall some key historical dates in the fight against discrimination:

August 26, 1789, the Declaration of the Rights of Man and of the Citizen: Article 1 – “All human beings are born free and equal in dignity and rights. Social distinctions may be founded only upon the general good”

Discrimination is an act done against one or more individuals against whom one has a negative bias. Any discrimination causes physical, material or psychological harm. Discrimination is always present because the human being has a “brain” that categorizes and provokes generalizations leading to stereotypes.

Categorization is a daily mechanism that we use subconsciously to simplify the understanding of our environment. We define categories and “arrange” things in “boxes” as they are presented to us. Prejudices are preconceived opinions or judgments, most often influenced by social environment, education or beliefs, about a given person or social group. This representation, often negative, is a way of enhancing the perceived value of one’s own origin or social affiliation. They are mostly passed on from family, education and the cultural environment that influences our attitudes, our behavior and our judgment. In most situations, it’s not really based on objective data.

Stereotypes are also simplifiers for understanding the environment. Naturally, social bonds will be created with people sharing the same stereotypes, which will reinforce the basic idea because each human being is built in a world that is his/her own. We create our own mind map based on our life experiences. Prejudice is beyond the stereotype because it induces a negative attitude towards the people or elements considered. Moreover, it is not based on an experience but on a prejudice. We judge without knowing.

Here are the 25 criteria of discrimination:

Particular vulnerability resulting from economic situation, apparent or known by the perpetrator

Ability to speak in a language other than French

Real or presumed belonging to an ethnic group

Real or presumed belonging to a nation

Real or presumed belonging to a certain race

RDH exists to uphold human rights and RDH advocates for these fundamental rights for all human beings. There are two types of discrimination: direct and indirect.

What are direct and indirect discrimination?

Direct discrimination: Art. 1 paragraph 1 of law 2008-496 of May 27, 2008;   “Direct discrimination results from a situation in which, based on a person’s belonging or non-belonging, real or presumed, to an ethnic group or race, his religion, beliefs, age, disability, sexual orientation or gender, the person is treated less favorably than another is treated, was treated or will have been treated in a comparable situation. ”

“Indirect discrimination results when a seemingly neutral provision, criterion or practice which, for one of the reasons mentioned in the first paragraph, may be of particular disadvantage to persons in relation to other persons, unless that such provision, criterion or practice is objectively justified by a legitimate aim and  the means to achieve that end are necessary and appropriate.” Indirect discrimination is most frequently collective.